At twelve years old she is owning the game. You would be hard pushed to find someone in the UK wakeboarding scene who hasn’t heard of young Eve Smith-Lang. As well as being an accomplished young athlete she’s got the winning personality that every sponsor looks for in an ambassador: confident, outgoing, and a role model to other riders. She has too many titles under her belt to name, but let’s give it a bash. In 2017 alone she claimed: Under 14 Scottish Wake Series Champ, Cable Ties Open Ladies Winner, U15 Girls National Wake Series Champ for both Boat and Cable and much much more.

I came across Eve during my first year of coaching at Glasgow Wake Park, having been pre-warned not to underestimate this girl’s riding I introduced myself as her driver for the set and told her to show me what she’s got. I remember after her warm up I was stumped, what could I teach this kid – she already knows it all! Over the past years my coaching has developed and I have learnt new skills and coaching techniques, so too has Eve developed her riding – pushing her tricks to new levels with this season having a focus on the complex world of air tricks.

So I thought, who better to kick off my wakeboarding interviews for 2018? I’ll let Eve take it from here:

Where do you do most of your riding?

During the season when I am at home I mainly ride Foxlake. I am lucky to be one of their sponsored riders. I have ridden there since the beginning. It’s just round the corner from my house and the features are really fun and the coaches are awesome. I am also a regular at Glasgow Wake Park, its fun to change things up a bit and I have had some really good coaching there with the air tricks. For full system though I generally ride at Hannam’s Wake Hub, I am a full member there. I also ride at Liquid Leisure and Box End Park. Any time I get the chance to ride I go for it!

When I’m riding boat it’s got to be Loch Lomond, the water might not be the warmest but do you know anywhere you can ride with a better backdrop than that?

What are you riding at the moment?

Wakeboarding isn’t the most mainstream sport, how did you get into it?

I was 8, in primary 4, my school were running this partnership with Foxlake called Active Schools – they still do. It introduces kids to a new sport at a lower cost as a taster session. I knew right away after my four week taster that I wanted to keep going.

I saved up all my Christmas and birthday money, I didn’t want anything else just my own board – I still have it, I will keep it forever.

What do you enjoy so much about Wakeboarding? 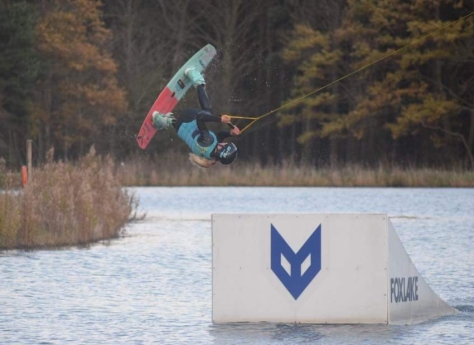 Is there anything you find difficult about the sport?

Tricks are only difficult until they aren’t so I guess my answer is getting enough time to practice! Ha! Stuff gets in the way – mostly school.

When you’re not riding your wakeboard, what are you up to?

I like Skateboarding, Snowboarding, Crossfit, playing football, mucking about with make-up and hanging out with my friends, watching Netflix… the usual stuff.

Are there any changes you would like to see in Wakeboarding?

Yes for sure! Raising awareness and encouraging more kids in the sport would be great. I think we need to raise the profile of the sport. Bringing it in to the school curriculum would help, and more opportunities like Active Schools would be amazing.

I have huge plans for this year. I am going to compete more at international level so some exciting travel plans are getting worked out at the moment.

You already do so many activities, are there any other sports you would like to get into?

I really want to skydive. I have done indoor skydiving and I love it. I can’t wait till I am old enough to do it for real. Annoyingly in the UK you have to be 16 years old, but Australia it’s only 12 and if all goes to plan that could be something for early 2019.

You’ve become a role model for girls in the sport, how do you think we could get more girls involved in wakeboarding?

There needs to be more equality. I have mostly had great coaches but I know not everywhere or everyone treats girls the same as boys. I think that maybe some people don’t want to let girls potentially smash themselves up on tricks that they would happily let boys try. I was once told to be careful trying something or maybe it would be better not try something when I have heard the same person actually encourage a boy to do the same thing, and we were at the same level, there was no reason for it. I don’t think we should be separated though. I have always pushed myself more riding with boys its really positive.

I think an attitude shift needs to happen everywhere. You see it all over the media, inequality, how much people are paid, how they are treated. I want to see more girls in the sport, all sports, especially the ones seen as “for the boys” like wakeboarding, snowboarding, skateboarding and cycling. This change needs to happen when girls are young. They need to be told to be brave rather than be careful. Then there is no excuse to say wakeboarding or snowboarding is more for boys. More girls would be willing to give it a try if they believe they can from a young age.

There are amazing women in these sports as role models now too. For me Julia Rick, Courtney Angus, and Anna Nikstad to name just three are killing the wakeboard scene right now. Their trick list is so impressive, that’s who I want to compete with.

Eve would like to take this opportunity to thank her sponsors and everyone who has supported her. She is looking forward to continuing working with Foxlake Adventures, Island Feather, Moose Noodle, Dry Robe and Cab 9 Eyewear in 2018. She added “I really want to thank everyone who has supported me so I have to include Glasgow Wake Park, Hannams Wake Hub, Loch Lomond Wakeboard School, my Coaches (both Cable and Boat) my Family and Friends.

You can keep up with Eve’s adventures on her public Facebook page here.